Give & Get Matched
KNPR
KNPR's State of Nevada

You know the hair, the wit. After 25 years, Carrot Top is still going strong in Las Vegas

At an open mic in Boca Raton, Florida, a college-aged Carrot Top told jokes others had written. But he needed his own act.

“I said, ‘Oh wow, that’s hard. … There weren't really props at all, there were just jokes about my hair. I had come up with a big red wig, and I'd take it off, and then my hair would be the same as the wig’s. It was stupid. … It was visually kind of funny.”

The woman he was auditioning for asked if he had any more signs.

He ended up with a dozen signs.

The name of one of Las Vegas’ most iconic performers conjures a lot of thoughts. 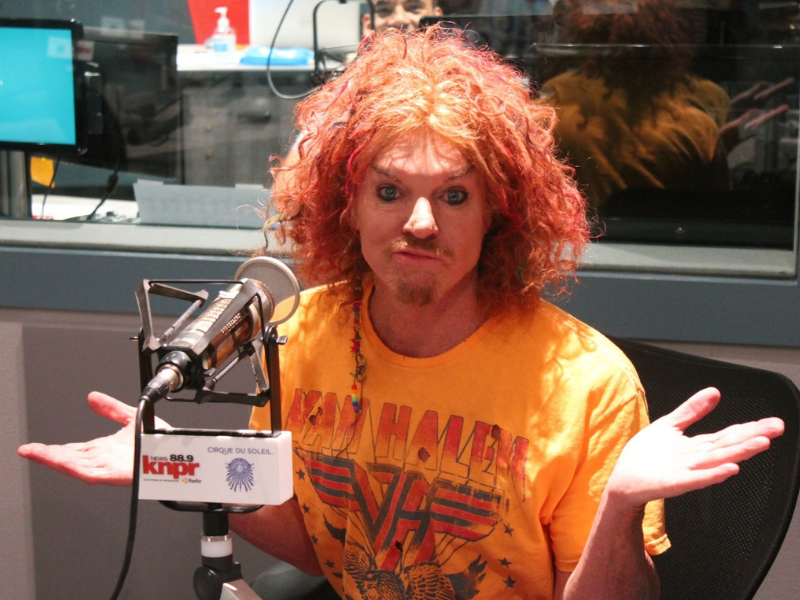 That hair. That smile. The quick wit. “Laugh until you’re orange in the hair,” says the billboard promoting his show.

And Carrot Top, now 57, has been churning out the props and one-liners for 25 years. That’s a long time in any profession. In Las Vegas, it’s remarkable.

That wit is often tied to intelligence, but Carrot Top said he just used this association as a “non-joke.”

“This guy says, ‘You're like, really smart, right?’ And I was like, ‘My brother went to the Air Force Academy and became an F-16 fighter jet pilot. So he's smart. I have, you know, a rubber chicken on a tennis racket.’”

His father worked for NASA, but his mother would say Carrot Top wanted to be a comedian at 8, inspired by Gallagher. Once he graduated with a marketing degree, his family asked, “What’s your plan?”

He told his family he was going to try stand-up comedy.

He was quickly booked by a friend and never looked back. He’s now performing at the Luxor hotel-casino for the second time.

When he first came to town, he did a weekend at Bally’s, “and it was horrible.” He said the combination of the large room, big booths and an audience escaping the blazing sun meant they “fell asleep pretty much the whole show.” So what did he do? He decorated the stage to look like a dorm room.

“I was scared to death just to talk. I had to have stuff.”

He thought he bombed, but was soon offered on-and-off weeks performing at MGM Grand.

“I would come in early and sit and watch George Carlin and then the next night I'm like, ‘I'm playing in the same room,’” he said.

The first couple of years at Luxor, a full time residency, was rough.

“I think once I got my house, I got a little normalcy,” he said. “I wasn't living in the hotel. It still took a couple of years. … You know, it just, one day, I don't know if I said, ‘I got this Vegas thing down.’ … If you're playing Vegas, it's kind of a big deal. And so, it's very important to give, every night, the audience the best show. And that's what makes it fun.”

In 2020, the COVID-19 pandemic shut down his show, along with nearly everything Las Vegas is known for. 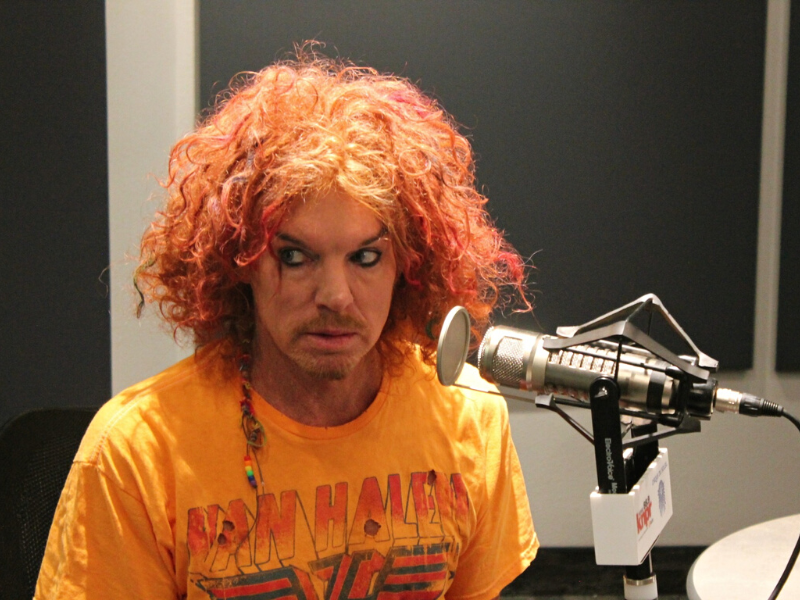 “I was losing my mind. I swore, I was honestly thinking this is the end of the world. We are never going to recover from this,” he said.

But it’s, as he said, his job to get up there and make everyone laugh after something catastrophic. He said his hardest show was after 9/11. He refused to go up for the first month, while his colleagues were already back on stage.

“I’m not mentally ready to go up and be funny,” he said.

He was off for a year during the pandemic. They put his show in Criss Angel’s old theater, 2,000 seats restricted to 50, and the closest audience member was 500 feet away from the stage. His was the first major act to return to the Strip. But it worked out: the audience knew he was uncomfortable, but “we got through it, and I remember thinking, it was still fun.”

A few years earlier, on October 1, 2017, he was locked down on the Strip. Next door, 58 people had been killed and hundreds more injured at the Route 91 Harvest Festival, the deadliest mass shooting in modern history,

“I think we left at 9:30 in the morning,” he said. “No one could sleep because everyone’s nervous and scared to death … We just kind of looked at each other and like, ‘What do we do now?’”

You can joke about the pandemic, the recession, but situations like the shooting or a plane crash wouldn’t be joked about. “It’s off limits, and every comic knows the boundaries.”

He wouldn’t consider himself an icon, but he said the title comes from longevity. 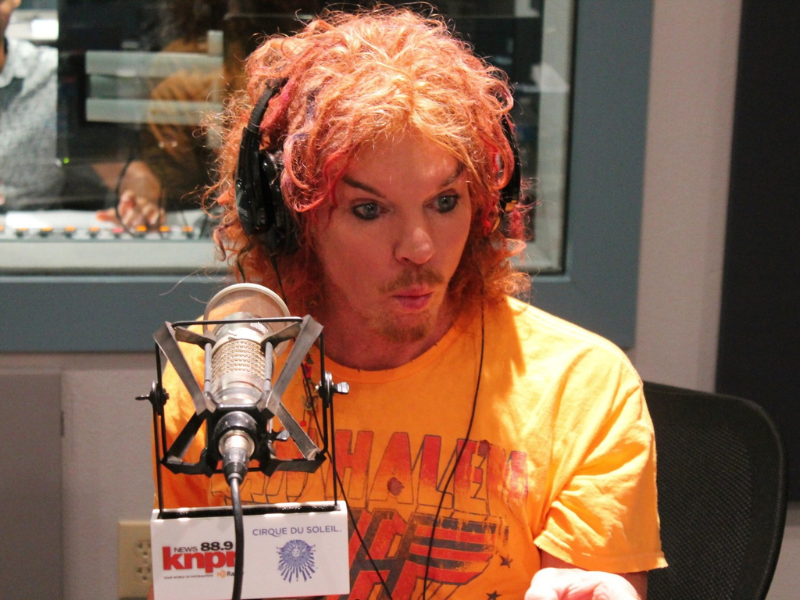 “But that means you’re old,” he said, “because you can’t be an icon or a legend unless you’ve been around for a long time.”

Though, he said he’s the one who helps young comics seeking advice.

“You just got to go do it,” he said. “Bite it, go for it and get as much stage time as you can. So you can kind of figure out what it is you are going to talk about when you get up there.”

And yes, his hair is really that naturally red. He once went to Shania Twain’s show and was, of course, instantly recognized. She asked him why he doesn’t put on a hat, cover his hair.

What’s next for Carrot Top?

But for now, he’ll keep performing at the Luxor.

“This is all I know. I don’t have anything else. I’m just this. When this is it, I’ll just go sit somewhere and ponder how much fun I had.” 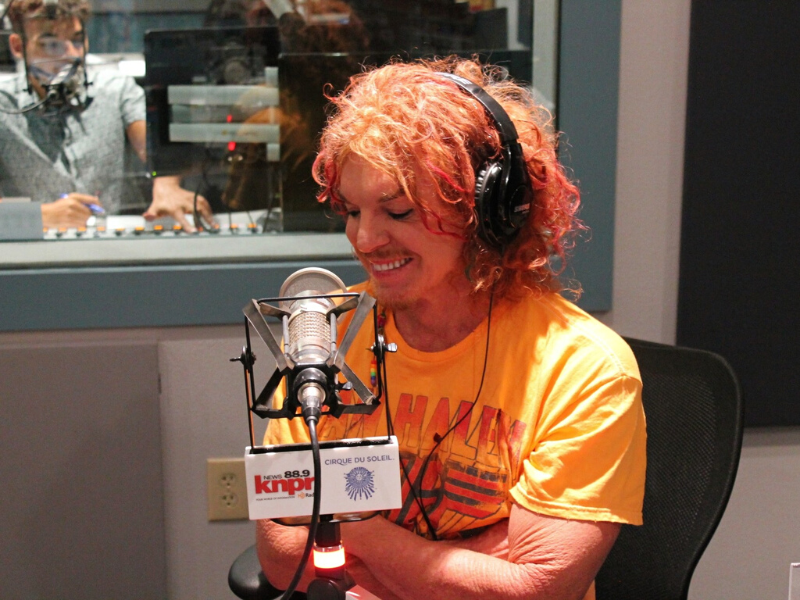 Carrot Top On Making Props, Life In Vegas, And Why Gallagher Is Funny

Trump To Pardon Turkey Again, Trying To Show Normalcy Amid The Abnormal

Do Carrots Really Help Your Vision?